Do you scrunch your face in frustration when your hear your child mutter the dreaded phrase, “I’m bored”?

Take a deep breath and unclench your fists — guess what? Being bored is actually good for children and not a sign of bad parenting. Psychologists report children are bombarded with constant entertainment through technology, bedrooms full of toys and a schedule of activities that would make the Prime Minister’s head spin. 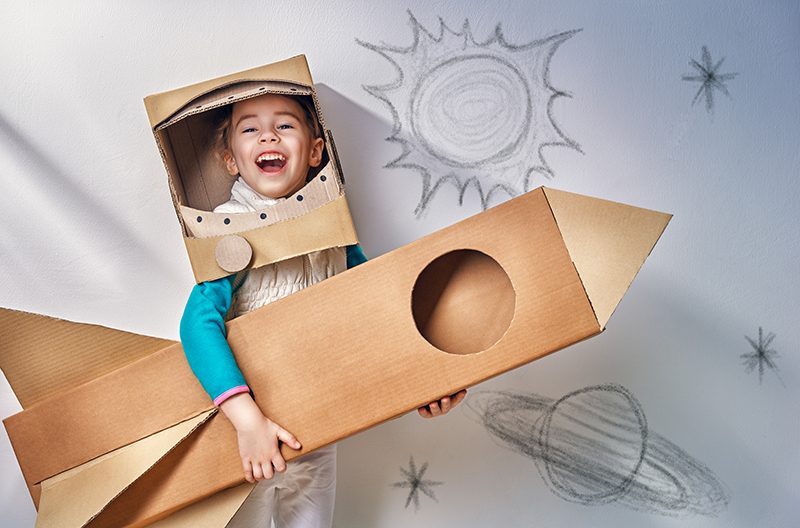 Where is the time to stare vacantly out of the window, daydream, or just sit and think clearly and calmly?

Research shows boredom, or the frustration that comes with not being engaged in anything at all, offers great benefits for children in particular. It allows the mind a moment to stop and rest, but ultimately boredom is the pathway to creative thinking and imaginative play. A bored mind, it is argued, will seek something more interesting to do. Dr Helen Street, a social psychologist and creator of the Positive Schools Initiative, which promotes mental health and wellbeing conferences in primary and secondary schools, says children need to experience boredom more than ever before.

“We are seeing a massive creativity deficit in kids. A child’s school life is more structured than ever and from an earlier age than ever before,” Dr Street says. “There is this idea that school is a race and the sooner you get started on it the better you’ll be. Then of course there is the advent of technology, which has taken over our lives in the past decade. It allows children to spend an awful lot of downtime passively engaged with screens and leaves kids with very little time for unstructured play.

“As a result we are seeing a massive creativity deficit in kids. People often mistake creativity with having an artistic skill, but that is not what we are talking about here. “Creativity is important because it allows you to actively engage in life, to connect with people and pursue your passions. But to do that you have to learn to be self-directed. “This is difficult for a child who has grown up having every demand met by their parents and every moment filled in with scheduled, structured activity, with little or no choice or control over what happens next.”

The value of boredom is not a new theory, famed philosopher Bertrand Russell pointed out the benefits as early as 1930 in his book The Conquest of Happiness, where he states “a child develops best when, like a young plant, he is left undisturbed in the same soil”.

In 1999 a pair of German public health officers were so concerned with the amount of toys provided to children in preschools they introduced a bold plan. Called Der Spielzeugfreie Kindergarten, or the nursery without toys, they removed every toy from a preschool for three months of the year, leaving only tables, chairs and the odd blanket.

“One of the best things they can do for their child is allow time for regular free play every day.” The observers noted that on the first day the children sat hesitantly staring at each other, but by the second day they were using the blankets and tables to create castles and cubbies, and the chairs to simulate trains. The teachers reported the children concentrated, socialised and communicated better following this period. Put simply, the theory shows that bored children will seek out a more satisfying activity because the actual act of being bored is so lacking, the mind will naturally start to seek out more enjoyment.

It’s easy to blame technology for the zombie-like ways children sit for hours clutching their devices or staring at the television. But Dr Street says technology is not the sole culprit for a lack of self-directed play in homes and schools. “Self-directed play allows children to engage in an activity where they have choice and control over what they do,” Dr Street says. “It allows a child to become so totally engrossed in their activity that time passes without them even noticing. It’s called being ‘in slow’ or ‘in the zone’ and it’s a wonderful feeling but, as parents, we don’t allow enough of it.”

Counsellor and psychotherapist Georgina Manning created the program Peaceful Kids, which instructs children on how to achieve mindfulness and meditation in schools, after she noticed a spike in stress and anxiety in children as young as five. The two-day program, taught in schools across Australia, teaches children to be fully present through a range of exercises.

“The program teaches kids simple activities like how to notice their breath when their mind wanders,” the Wellbeing For Kids director says. “But it’s also important for kids to engage in informal mindfulness, which is just free, creative play, things like playing with Lego, making robots from cardboard, building an ant farm, dressing up. This kind of informal mindfulness allows them to become fully immersed and it clears the mind.

“If a child never has the opportunity to rest their mind — and sleep alone doesn’t do it — it can lead to anxiety, ongoing stress response, perfectionism, generally being unhappy and burning out.” She says the main elements in society preventing boredom is too much technology, over-scheduling activities and having a stressed family life. “Parents often feel guilty if their child isn’t constantly engaged in structured activities like sport, music, dance, drama and tutoring,” she says. “But one of the best things they can do for their child is allow time for regular free play every day.”

Moorebank mum Kylie Reynolds remembers playing with friends, riding her bike and swimming in the backyard pool after coming home from school. But the mum to Jay, 12, Kayla, 10 and Lachlan, four months, says a lot has changed from one generation to the next. She says she does daily battle with her children to get them off their screens and play like kids used to. “I think parenting kids today is a lot more complicated and challenging than when I was a kid,” she says. “And as far as I can see, the main reason is technology. “Kids have such a dependence of those screens and when I put the hammer down and say enough is enough, they really fight me on it. Kayla will find other things to do when I take the screens away, she’ll colour or read a book or play with toys, but it’s much tougher with Jay.”

Reynolds says she worries this generation of children are losing their ability to use their imagination or to be creative because of the dependence on screens. “I remember being bored when I was little but I’d go to a friend’s house to play or swim in the pool, I’d be out all afternoon with my friends, coming home only when dinner was ready.

“But I think parents are too scared to let their kids wander too far on their own these days, and I’ll admit I’m guilty of that too. I’m sure the threats that are around now were around back then but it wasn’t in your face like it is now. “The kids have plenty to do in the backyard, we have a netted trampoline, a pool and have had cubbies, slip ‘n’ slides and totem tennis, but they lose interest after a while. “I can see … how boredom can lead to kids finding more creative things to do. But I do think technology has reduced their interest in other simpler activities.”